For our seventh episode we welcomed another guest into the Book Fight Basement (though remotely this time, through the wonders of technology): our friend and former grad-school classmate Jason Lewis, author of the novel The Fourteenth Colony. Before becoming an author, Jason was a full-time musician, releasing albums both as a solo artist and with his former band, Star City.

More importantly, at least for our purposes, Jason has read Hemingway’s A Farewell to Arms 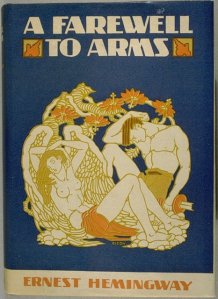 We got into it a little about whether Catherine is an interesting character or a one-dimensional projection of Hemingway’s idea of femininity, whether it’s fair to judge Hem’s attitudes about women using contemporary standards, and why Mike has such a weak spot for problematic women. Also, Tom proved once again that he’s incapable of understanding the concept of aggregate ratings.

Oh! And coming soon, we’ll have a second, briefer, “special episode,” in which we talk to Jason about his own book, particularly his decision to record a soundtrack in the voice of the novel’s protagonist, and to fund the project largely through Kickstarter. As a musician, he’s got some interesting ideas about what the world of book publishing could learn from the world of indie music. So stay tuned for that.

In the meantime, you can listen to Episode 7 by clicking on the little player thingy below, or by downloading the file directly, to play on any MP3 compatible device. Or click on the tab at the top of this page to find us in iTunes and subscribe to our feed. Thanks for listening!

2 thoughts on “Episode 7: Ernest Hemingway, A Farewell to Arms”