This week we’re talking about the 2011 memoir from Andre Dubus III, author of House of Sand and Fog and son of the acclaimed short story writer Andre Dubus. The book details the younger Dubus’s childhood in a series of rough New England neighborhoods, his eventual prowess as a fighter, his struggles to find better outlets for his anger, and his evolving relationship with a mostly absent father. 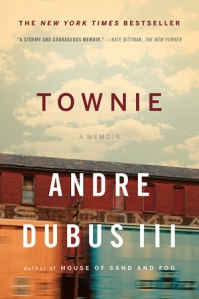 Also: the first installment of a new feature, Raccoon News.

As for the book, we talk about the need to balance thoroughness with concision in memoir, the arc of Dubus’s life and whether aspects of that arc have been artificially shaped in the narrative. Though there’s a lot to admire about the memoir, including its examination of male violence, and the transformation Dubus underwent as he learned to replace his anger with empathy.

As always, you can stream the episode right here on our site, or download the mp3 file. Or check us out in the iTunes store, where you can subscribe (for free!) and never miss another installment.

Thanks for listening! And we hope we’ll see some of you this Thursday (Sept. 25) at our first-ever live event at the Spiral Bookcase in Philadelphia!