Astute listeners will note that there’s supposed to be a book episode this week. Unfortunately, that episode was eaten up by a technical snafu. Fortunately, we had our second Winter of Wayback episode ready to go, and here it is!

But before we get into the details of this week’s episode, let us give you the link to our Indiegogo page, where you can donate a very small portion of your hard earned money to help us meet our annual fundraising goal. We bring you this show every week, for free, so this is your chance to give a little something back. Plus we’ve got some great donor giveaways for you, including a three-pack of bonus holiday episodes for $35, which is, frankly, a pretty amazing bargain. If that’s a bit steep — and, hey, we’re both poor writers, we get it — for only $15 we’ll write you a blurb and read it on the air. And honestly, even five or ten bucks will help. Check out all the details here.

OK, so this week we’re visiting 1982, the year of Tom’s birth, to read a story called “Dancing Ducks and Talking Anus,” by James Ferry. The story appeared in the 1982 Best American Short Stories anthology, selected by John Gardner, after which the author was basically never heard from again. In fact, some internet sleuthing led us to believe this was Ferry’s only published story. Then we ran across Troy Tradup, a writer and publisher who loved this story so much he’d spent nearly 30 years tracking down its author. We caught up with Tradup over email, and he filled us in on as much of Ferry’s story as he’s been able to assemble (see full interview, below).

Tradup eventually acquired the rights to the story and made it available as a 99-cent ebook, which you can purchase through the website of his company, Tough Times Publishing.

We’re also talking this week about all things 1982, including the Commodore 64, which was first introduced that year and became the best-selling computer of all time. More relevant to our show, both of us owned them as children. We also talk about the 1982 World’s Fair, held in Knoxville, Tennessee. Check out this ad for the fair, which we swear is a real thing:

As is our custom on these Winter of Wayback episodes, we’ve got some quick Beatles-related news, and Philadelphia-related news, including this pretty incredible video, of some idiots in Kensington who got their hands on a camcorder:

Also! Here’s the cover of Ringo Starr’s Stop and Smell the Roses, the album which apparently got him dropped by his label in 1982.

And here’s a picture of Bryan Ferry, formerly of Roxy Music and presently of your dreams: 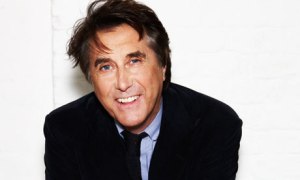 Finally, we talk this week about “Lawn Chair Larry,” a truck driver who in 1982 piloted a Sears lawn chair over Los Angeles with the help of helium balloons, his girlfriend, Miller Lite, and moxie. Larry’s story is pretty funny, until it eventually takes a tragic turn. Careful listeners might hear Mike choke up a little at the tail end of the episode, as he recounts the later details of Larry’s life. On a cheerier note, here’s a newsreel from Larry’s flight:

As always, you can stream the episode right here on our site, download the mp3 file, or visit us in the iTunes store, where you can subscribe (for free!) and never miss another installment. we’d love to get your feedback on what we talked about. You can email us, hit us up on Twitter, or just leave a comment here on the site. If you like the show, tell your friends. And give us some damn money!

Book Fight: What is it that you love so much about this story?

Troy Tradup: A toughie right off the bat! I think I was initially struck, back in 1982, by the aggressiveness of the writing – that title, that startling opening sentence – and by the unrelenting darkness of the story. I was a young writer myself at the time, and something about Ferry’s prose just spoke to me. I wanted my own writing to be that brave, that confident, that startling.

Over time, I grew to better understand all of the layers Ferry had managed to build into the piece, and its overriding themes of troubled assimilation in a changing (or perhaps irrevocably changed) America. The returning Vietnam vet who can’t quite find his place, the Native American watching his culture fade, the sad woman unable to assert her own feminist power and so instead a victim to a bad relationship – there’s some major stuff going on in this story!

Ultimately, though, what’s most thrilling and lasting about “Dancing Ducks” for me is its gorgeous dark language and its overwhelming sadness for all three characters and the world they’ve inherited.

BF: In your Goodreads review, you said you spent 30 years trying to track down the author. I’d love to know more about that. Where did you even begin? How did you go about trying to locate him? Did you ever come close to finding him? Do you have any sense of how he managed to write this one story then just disappear?

TT: In the early days, I haunted libraries and bookstores looking for any other mention of James Ferry anywhere. Later I moved on to the internet and Google, and eventually – almost by accident – stumbled upon a comment by one of James’s friends on some random blog posting saying that James had died unexpectedly in 1999. That friend – Mary Donovan – helped me track down James’s brother Bill, and that allowed me to start the ball rolling on publishing the new e-book.

I go into more detail in the afterword I wrote for the e-book of “Dancing Ducks,” which includes biographical material about James and some beautiful thoughts from two of James’s friends (one being Mary Donovan) about their time together in a graduate writing program at the Vermont College of Fine Arts.

As for “Dancing Ducks” being something of a one-hit wonder, I do know that James left behind a number of other manuscripts, including at least part of a novel. At some point in the near future, I’m going to discuss with Bill the prospect of getting those materials properly catalogued and perhaps placed with a university or commercial agent. I’m not sure exactly what’s there, but I certainly have hopes for more stories like this one!

BF: Can you describe the process of acquiring the rights to the story? I’d like to think it would be relatively simple, but everything I know about publishing tells me it almost certainly wasn’t.

TT: In this case, once I’d connected with James’s brother Bill, the acquisition process was pretty simple. You’re right, though, it typically is not.

I think Bill was both flattered and flummoxed that someone was fanatic enough to have pursued his brother’s story across thirty years. I made it clear that this was strictly a passion project, and I think it really pleased him to know that James’s story would once again be available to readers.

BF: Is there anything else you learned about James Ferry that maybe you haven’t covered above?

TT: You asked before about this apparently being James’s only published story. I’ve since located another one – a very esoteric combination story/essay called “A Note on the Type” that was published in the journal Fourth Genre shortly after James’s death. That issue of Fourth Genre also contained a fascinating piece by novelist Bret Lott about James Ferry. Lott was a mentor to Ferry, and writes about the surreal experience of having his own novel chosen as an Oprah book at virtually the same time he was trying to process James’s death.

The other interesting thing I learned about James Ferry is how humble he apparently was. He had the huge success of “Dancing Ducks” being chosen for the Best Short Stories anthology and basically never told anyone, not even his closest friends. I wish I would have known him in person; he sounds like a pretty cool dude.

BF: Are you working on resurrecting any other lost fiction for Tough Times? Are there any other white whales like James Ferry?

TT: I started Tough Times back in 2010 to publish my own novel, The Forsaken Boy. That proved quite a spectacular success, so I broadened my mission to publish out-of-print horror, beginning with Michael McDowell’s serial novel Blackwater last year and continuing with a couple of titles this year. The chance to publish “Dancing Ducks” obviously moved Tough Times outside the realm of horror, and I’ve since explored several other non-horror titles I’d like to acquire, but negotiations can take a while.

There are several fantastic publishers right now dealing with exactly the sorts of material that attracts me – most notably the powerhouse boys over at Valancourt Books – so the majority of my “white whale” titles are either already in process elsewhere or hopelessly tied up (at least for now) in one sort of legal chaos or another.