Well, we’ve come to the end of the road on our Winter of Wayback episodes. After this one, we’ll have to finally admit it’s become spring, and come up with a new theme. But first: once more unto the breach, dear friends! (Shakespeare was talking about listening to a podcast, right?)

In this week’s episode we travel back in time to 1916, where we read an early P.G. Wodehouse “Jeeves” story called “Jeeves Takes Charge” (you can read it for free via that link). Once we sort out the various differences between valets and butlers, we talk about the story’s humor, and why Jeeves became such a popular, enduring character.

If you like that Wodehouse story, you should give this one a read, too: “Strychnine in the Soup” isn’t a Jeeves jam, but it’s really funny. So many comical misunderstandings!

Of course we’ve got lots of 1916-related items to discuss this week, too. Like the most lopsided college football game of all time. And elephant executions. Terrorism and wrongful convictions. The Beatles song “Taxman,” which apparently Tom really hates. A famous shark attack at the Jersey Shore, which apparently turned Americans against sharks forever. And the founding of Piggly Wiggly, which revolutionized grocery shopping.

Here’s a picture of the Pink Palace, the 36,500-square-foot mansion built by Piggly Wiggly’s founder. The dark clouds in the photo are appropriately ominous. 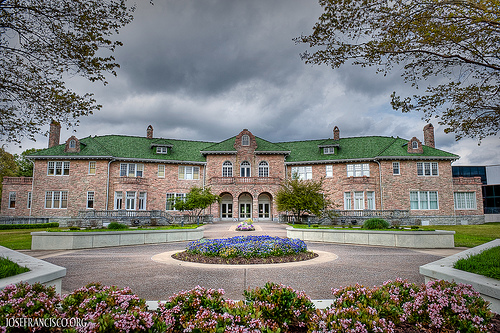 And here’s a 1919 political cartoon in which a shark is a stand-in for “capitalism.” 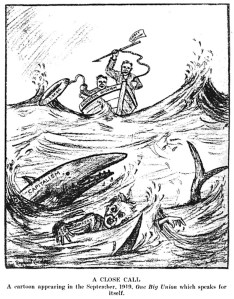 While we’ve got your attention, please don’t forget to support our sponsor, Powell’s Books. If you use any of the links around our site to get to the Powell’s site, including this one, for Wodehouse’s Thank You, Jeeves, anything you buy from Powell’s will generate a little money for the show. Which adds up! (To a bar tab every few months, usually.)

As always, you can stream the episode right here on our site, just by clicking on the little player thingy below. Or download the mp3 file. You can also check us out in the iTunes store, where you can subscribe (for free!) and never miss another episode. Actually, how about doing us a quick favor: click over to the iTunes store and give us a rating and a review. It helps us reach more people and move up the iTunes charts. And it will only take you a minute. Thanks!

We’d love to hear what you think about the various things we talked about this week. You can send us an email, hit us up on Twitter, or just leave a comment here on the site. And speaking of comments, you can still give us yours on the state of the show, while also nominating a book for an upcoming bonus episode. We’ll close nominations later this week, and then we’ll let everyone vote on the nominees.