Kanan Makiya is probably best known for his 1989 book, Republic of Fear: The Politics of Modern Iraq, a (nonfiction) account of his home country under Saddam Hussein. He’s also known as one of the key Iraqi agitators for the 2003 U.S. invasion, arguing to America’s political elite that Hussein’s regime badly needed to be toppled. It was Makiya, in fact, who told White House officials that the U.S. would be greeted with “flowers and sweets” by the Iraqi people.

That prediction turned out to be wildly inaccurate. Now, a decade after Saddam Hussein’s execution, Makiya has written a novel that serves as an examination of the years 2003-2006 in Iraq, and what went so terribly awry.

This week, Book Fighters, it’s time to put away our usual foolishness and finally learn something for a change. Smarten up, people! 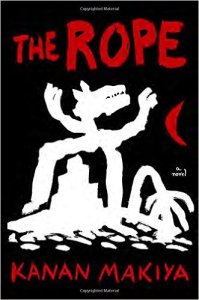 Ha ha, just kidding, we’re still idiots, and we don’t know anything about anything. If you’re looking for a podcast that can untangle the complexities of the Iraq war, you probably want something in the NPR family. If you want to hear a couple guys do a deep-dive into the Amazon reviews of a Midwestern grandmother, soap maker and birth doula, then you’ve come to the right place!

As always, we value your feedback, and would love to hear what you think about the stuff we talk about. You can leave us a comment here on the site, hit us up on Twitter, or send us an email.

You can listen to the show right here on the site, by clicking the player thingy below, or downloading the mp3 file. You can also find us in the iTunes store, or wherever you normally get your podcasts.

One thought on “Episode 132: Kanan Makiya, The Rope”