It’s Valentine’s Day, Book Fighters. Well, by the time you’re reading this it’s no longer Valentine’s Day, but we’re writing this on Valentine’s Day. One of us is drinking a winter-themed IPA and pre-heating the oven to roast a chicken. The other is almost certainly continuing his lifelong boycott of Valentine’s Day, which he talked about near the beginning of this February 2013 episode, and which the other of us thinks he should probably just get over already. Sure, it’s a Hallmark holiday and all, invented to sell greeting cards and chocolates. But love, at least in our experience, is a pretty rare commodity, and so what’s wrong with a day devoted to its celebration? Then again, the one of us who boycotts Valentine’s Day has managed to sustain a marriage for something like seven years, and the other of us realized a few weeks ago that half his Facebook “people you may know” suggestions were women he’s been on between two and four internet dates with at some point over the past eight years. So, which of us knows how love works, really?

The key to a good roast chicken, incidentally, is to perforate the skin of a lemon with a knife and then shove the whole lemon up the chicken’s backside. Throw a few unpeeled garlic cloves in there, too. Trust us on this.

But why are we talking about Valentine’s Day, and roast chicken, when we should be talking about this week’s very special guest, Mr. Andrew Brininstool, who came all the way from Texas to be on our show? Actually, he came all the way from Texas to read at the Tire Fire Reading Series, which one of your hosts co-organizes, and also to shepherd his wife around the City of Brotherly Love, which neither of them had ever visited. Actually, maybe his wife did the shepherding. Let’s not hem people in with traditional gender norms.

And who of us, really, can claim to understand the secrets to long-lasting love? Surely it takes a little luck. It takes the occasional out-of-town vacation. It takes a thousand small kindnesses, scattered throughout one’s days. A million, probably.

Anyway, here’s the book we read. 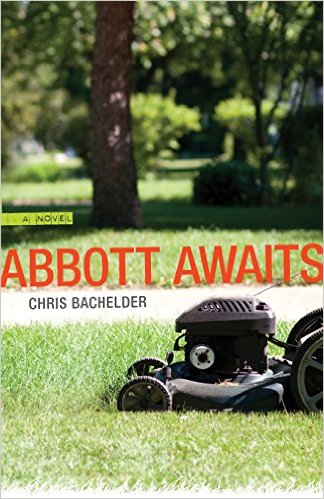 On the one hand, this isn’t a book about love, yet on the other hand it’s very much a book about love. The love for one’s child. The love for one’s spouse, and how that love is challenged on a near-daily basis, and how most of those challenges come not from your particular spouse but instead from your own brain, which sometimes is very smart but other times is very, very dumb. Like, your brain might think of thirty reasons your spouse is wrong about some silly, inconsequential thing, and then your brain will also decide it’s a good idea to give voice to these reasons, rather than simply keeping them to yourself and being thankful that your spouse goes on tolerating you, day after day, given how annoying you can be, how big a pain in the ass, though we suppose at the end of the day we’re all pretty annoying from time to time, and we’re all pains in various people’s asses, and maybe that’s the secret to love: just choosing, day after day, despite your partner’s annoying, pain-in-the-ass qualities, to keep sticking around.

If you roast the chicken in a cast-iron skillet, you can get yourself a nice crispy skin. It’s probably healthier to cook it on a raised rack, so all the fat drips off, but it’s that kind of thinking that’s given us a world full of tasteless chicken breasts, a world where people don’t even eat the dark meat, which is insane, because dark meat is delicious. Throw some onions in the pan, too, if there’s room. Maybe a handful of potatoes.

We were really excited to have Andrew on the show. We’d never met him in real life, though we’d chatted with him over email several times, and on Twitter, and Barrelhouse published one of his stories, back in Issue 11, which we’re pretty sure is sold out now, unless you happen to come to one of our homes or apartments, where there may be six or seven copies in a box somewhere. Or you could read that story as part of Andrew’s book, Crude Sketches Done In Quick Succession, which is available from Queen’s Ferry Press. You can read an interview with him here. While you’re reading interviews, check out The Rumpus Interview With Chris Bachelder, which we mentioned a couple times during this week’s show.

Speaking of love, and also cooking, you’ll definitely want to stick around until the end of this week’s episode, because we once again talk about Tom’s Himalayan Salt Block, which includes its own carrying case, so you can take it to parties and then never be invited to parties again, because what kind of weirdo shows up at a party with a Himalayan salt block? You can use the block for cooking AND serving. Or you can keep it in its original packaging and take it out once or twice a year so your podcast co-host can make fun of it. We’re not here to tell you how to live you life, Himalayan-salt-block-wise.

We are, however, here to tell you how to live your life literature-wise. Read some books, people! And give them as gifts to the ones you love. If you’ve somehow managed to convince someone not only to love you, but to stick around and keep loving you, day after day after day? Buy that person all the books! Make them a delicious roast chicken. Drink a little wine. We’d recommend a Sauvignon Blanc.

As always, we’re happy to hear your feedback on the things we talked about this week. You can email us, hit us up on Twitter, or send us a message on Facebook. Or just leave a comment here on our site. We’ll only sass-talk you if your comment is mean. Despite our cynical, jokey exteriors, we’re tender-hearted souls.

You can listen to this week’s episode by clicking on the little player thingy below. Or download the mp3 file. Or, even better, visit us in the iTunes store, or wherever you usually get your podcasts, where you can download back episodes and subscribe (for free!) so each new installment is delivered automatically to your mobile device and then, with a couple button pushes, to your ears.

Thanks for listening! Come on back next week!